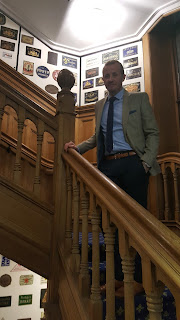 Ben explains “The event was held at 20 Aldermanbury, London, EC2V 7HY which is the Head Office of the Chartered Insurance Institute and the Personal Finance Society. It was a beautiful day in the city of London and the building itself is fascinating. Over a thousand years ago Aldermanbury was the home of Kings. Rumour has it that the Insurance Hall stands on a site originally occupied by a Saxon Palace, but we know for certain that a medieval manor house occupied the site, which by the 14th Century had become an Inn called ‘The Axe’ (the commercial sign of The Axe, which originally hung outside the Inn in 1698, is today situated above the entrance to the CII museum on the second floor landing!)

In 1932 the Chartered Insurance Institute was in urgent need of accommodation and so purchased the site (which was by then a warehouse and the aforementioned dilapidated Axe public house) by way of a building fund. Those companies that subscribed to the Building Fund are represented in the magnificent stained-glass windows in the Great Hall which now represent a unique historical record of Insurance Companies that existed in the early 1930’s – familiar names, most now long gone. In fact, I couldn’t help but stare at these incredible windows in the great hall whilst waiting nervously to be called up to the stage. Important to note Her Majesty Queen Elizabeth II is the fourth Monarch to assume Patronage of the Institute and I was glad to have my picture taken with her (her portrait that is!).

You also cannot fail to notice the extensive collection of firemarks from across Europe which adorn the main staircase. At over 2000 items these comprise the largest collection in the world and feature some of the finest examples of both marks and fireman’s badges.

During the service all the graduates were required to stand and say the Graduation Oath. I was extremely proud to receive the Chartered title and equally proud to be part of a professional body that is now fully promoting our skills, professionalism and hard work to the public and business community. The Personal Finance Society qualifications are recognised throughout the world as evidence of commitment, knowledge and understanding. They underpin professional integrity and support the delivery of service to the customer. The graduation ceremony reflected this and therefore I would like to thank all my colleagues, family and fellow graduates for making this day special.”